The most common natural disaster, flooding threatens areas across the country. Flooding can result from a number of events but is most commonly a consequence of periods of intense rainfall or rapid snowmelt. Defined as the overflowing of water onto land that is ordinarily dry, flooding can occur in several ways. Flooding can occur when a body of water, such as a river or lake, cannot contain excess water or when excess rain or snowmelt simply can’t be absorbed by the ground. Flooding can also occur when large ice jams block waterways as well as when dams or levees fail. 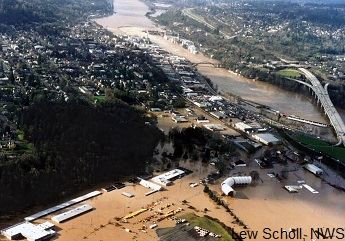 The physical characteristics of this natural phenomenon vary widely depending on weather, geology, and topography. Floods can occur slowly over the course of a few weeks or months as a result of persistent rainfall or develop in a matter of hours as a result of intense rainfall or rapid snowmelt. Consequently, the rate and duration of floods can vary drastically depending on the cause and other factors. However, no matter the cause, flooding can have a significant impact on the areas it affects.

The impacts of flooding on an area largely depend on the magnitude and duration of the flood. Flooding can disrupt major utilities and cause significant damage to infrastructure as well as homes and businesses. Most importantly, flooding poses a major risk to citizens. Citizens trapped or swept away by floodwaters can sustain serious injuries and fatalities can result. With such destructive potential, scientists at the National Weather Service have placed a particular emphasis on flood prediction methods and notification systems.

In addition to the five primary alerts, the National Weather Service also issues other notifications and forecasts. These notifications are largely area specific and include river and coastal flood alerts as well as river forecasts. It is important to note that although the National Weather Service issues flood alerts, local officials have still the authority to issue an evacuation notice if they deem flood danger significant enough to do so.

Taking action prior to a disaster can help to minimize future flood-related damages. Preparing for a flood includes taking a number of actions such as obtaining information on flood risk in your area, composing an emergency plan and assembling a disaster supplies kit, taking proactive measures to protect your home, and purchasing flood insurance.

One of the first steps to preparing for a flood is learning about flood risk in your area. There are a number of tools you can utilize to help you determine if your property is at risk. One such way is to visit the Statewide Geohazard Viewer produced by the Oregon Department of Geology and Mineral Industries (DOGAMI). This interactive map allows you to view flood hazards in your area. You can also visit the Klamath County GIS website to find official flood hazard maps created under the National Flood Insurance Program. Once you have identified your flood risk, you can then begin to create an emergency plan and assemble a disaster supplies kit.

Individuals living in flood-prone areas should have a well-thought-out family emergency communications plan that includes shelter locations and evacuation routes that take into account local flooding hazards. Emergency plans should also identify locations for high ground in the event that flooding requires you and your family to evacuate. In addition to a family emergency communications plan, individuals living in flood-prone areas should also have a disaster supplies kit. A well-stocked disaster supplies kits should include enough food, water, and supplies to last at least 72 hours. Furthermore, a disaster supplies kit should also include a battery-powered or hand-crank NOAA Weather Radio so that you can receive emergency alerts. After you have composed a plan and built an emergency kit, you can then take a few proactive measures to help mitigate flood risk in your home.

Taking preventative actions prior to a flood will help to minimize damage incurred by future flooding events. These actions can include the following:

In addition to taking proactive measures, individuals living in areas at risk from flooding should also consider purchasing some form of flood insurance.

Currently, the National Flood Insurance Program (NFIP) provides affordable insurance to property owners, renters, and businesses. Rates provided by the NFIP are standardized and depend on a number of factors, such as home value and, of course, location. Individuals residing in communities that participate in the NFIP are eligible to purchase flood insurance through this government program. Consult your insurance agent or visit FloodSmart.gov for more information on obtaining flood insurance for your home.

During a flood, conditions can change rapidly. As a result, it is essential that you stay alert and closely monitor local radio and television as well as NOAA Weather Radio. If you are advised to evacuate, do so immediately as both water levels and water flow rates can change rapidly during a flood. Make sure to follow pre-established evacuation routes and seek higher ground as soon as you receive an evacuation notice. If time permits, make sure to turn off or disconnect all electrical utilities and lock your home before you leave. When you are evacuating, adhere to a few safety measures to keep your family safe.

Whether you are evacuating by foot or vehicle, it is important that you avoid crossing floodwaters. As little as six inches of moving water can knock you off your feet and just one foot of swift water can sweep away a vehicle in a matter of seconds. Resultantly, it is advised to not drive through floodwaters. If you are in your vehicle and caught in rising floodwaters, safely exit the vehicle and seek higher ground. However, if the water is moving, do not exit your vehicle as you could be swept away by strong currents. Also, do not attempt to cross bridges that span sections of rushing floodwater. Heavy objects swept away by floodwaters, such as cars, trees, and other debris, can impact bridge piers and compromise the structural integrity of the bridge. Visit Ready.gov to learn more about what to do during a flood.

Once flooding has subsided, continue to listen to local media outlets and NOAA Weather Radio for additional information and instructions. Once you have been given the all clear by local authorities, you can return to your home and begin the cleanup process. When returning to your home, do not drive through any floodwater as it can still pose a risk. Also, it is important to keep children and pets away from floodwaters as these waters can be electrically charged or contaminated.

When you return to your home, there are a number of precautions you should follow. Prior to re-entering your home, assess your property and the outside of your home for any damage. Damage to your property or the exterior of your home could signal further interior damage or hazards. Make sure to take pictures of the damage for insurance purposes. Use extreme caution when reentering your home as a number of hazards could be present immediately after a flood. Do not enter any rooms that have submerged electrical outlets, cords, or appliances. If you hear buzzing, cracking, or popping, immediately leave the household and contact the power company or a qualified electrician to have power to your home shut off. Additionally, snakes and other animals may be in your home in the immediate aftermath of a flood. Be careful when looking in dark spaces.

Keep in mind that floodwater can be contaminated by raw sewage, oil, gas, or other chemicals. As a precaution, you should refrain from drinking tap water until it has been deemed safe by the appropriate authorities. Additionally, you should discard any open, sealed, bottled, or canned food items that have been damaged by or submerged in floodwaters. For more information on what to do after a flood, visit the National Weather Service Flood Safety Homepage or review the After the Flood Factsheet.

Subject to three major types of flooding, Klamath County is moderately susceptible to this hazard. One such type of flooding, riverine flooding, occurs when a body of water exceeds its capacity and it overflows its banks. Communities in close proximity to natural waterways, such as Beatty, Chiloquin, and Sprague River, are most susceptible to this type of flooding. A specific type of riverine flooding, shallow area flooding, can also occur in Klamath County. This type of flooding affects low-lying areas that would be inundated by a flood with a water depth of three feet or less. Yet another type of flooding that can affect the county is urban flooding. Resulting from the urbanization of fields and woodlands, urban flooding occurs when large areas of land are covered by impenetrable surfaces such as concrete or asphalt. This results in large amounts of water, which would have otherwise been absorbed by the ground prior to urban development, running off into waterways. Of the types of flooding that could impact Klamath County, the most damaging and frequently occurring is riverine flooding.

Home to the Sprague, Williamson, Lost, and Klamath Rivers, Klamath County has no shortage of natural waterways. Of these rivers, the Sprague, Williamson, and Lost Rivers are the most likely to flood with the Klamath River being moderately controlled by hydroelectric dams. Riverine flooding has proven to be a persistent problem in Klamath County. Most notably, Sprague River flooding in 1996 and 1997 resulted in damage to approximately 30 structures in and around the communities of Beatty, Chiloquin, and Sprague River. Recently, flooding in the Sprague River Basin in 2017 resulted in the activation of a local incident management team and damage to roadbeds and property in the surrounding areas.

Due to the historical prevalence of flooding, both Klamath County and the City of Klamath Falls participate in the National Flood Insurance Program. As a result, citizens at risk from flooding are eligible to purchase a flood insurance policy through this program. Residents wishing to do so should contact their insurance agent or visit FloodSmart.gov to learn more.